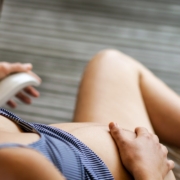 Your body will undergo many transformations during pregnancy, and your vagina will be one of those areas where the changes take place the most. To get the best prepared for these 9 tough months, read our no-holds-barred guide below!

Due to increased blood flow to the area, your vulva will take a toll, and here are 7 wacky, weird ways pregnancy can change it:

Normally it is a little pinkie down there, but when baby is on board, your vagina can turn to a blue or purple colour (which is called Chadwick’s sign). In fact, that colour change can be one of the first signs that you are now pregnant. According to Brett Worly, an ob-gyn at The Ohio State University Wexner Medical Center, your labia, vagina, and cervix might get a bluish discolouration, resulting from increased blood flow within 6 to 8 weeks after conception.

Your period will be absent for a while thanks to pregnancy, but spotting within the first trimester is common and shouldn’t be worried about (according to the March of Dimes, one out of two pregnant women have some bleeding or spotting). However, you should contact your doctor whenever you see any vaginal bleeding, even when it already stops. Normally, vaginal spotting happenes as the result of implantation in the uterus and the formation of the placenta. In some cases, light bleeding is caused by something else, such as yeast infection. But if you feel any pain, or cramps, you should immediately call your health-care provider.

No, we are not talking about the varicose veins on your legs! Those bulging, painful, purple varicose veins can happen to your private parts too, due to a combination of increased blood flow, an enlarged uterus and pregnancy hormones. Only 10% of pregnant women experience this issue and according to the journal Phlebolymphology, it is more likely to happen during the fifth month of a second pregnancy. However, the risk will gradually increase with the number of pregnancies. But it can still happen on your very first pregnancy according to Dr. Katie Bolt from Partners in Ob/GYN Care at Texas Children’s Pavilion for Women. Dr. Bolt also notes that the labia is often affected by those veins, but sometimes they can appear on the upper inner thigh too. The issue will be naturally solved within 6 weeks after birth. But you can speed up the healing process with warm baths, lying on your left side, elevating feet, doing light exercises and avoiding sitting or standing for long.

Again, because of the increased blood flow to this area, your vulva might feel full and heavy. Normally, your crotch will not appear swollen, but it might feel that way. That is actually good news, more blood supply means more sensation. And you know, it means better orgasms as well!

When the trapped air inside the vagina gets released, it causes a sound similar to a common fart. Vagina farts might happen more frequently during pregnancy and the culprit is a combo enlarged belly, intercourse positions, exercising, and over-burdened pelvic floor muscles.

During pregnancy, you might have to deal with bacterial vaginosis (BV) or yeast infections due to the overgrowth of naturally occurring vaginal bacteria or fungus, caused by pregnancy hormones. These are common during pregnancy and cause crazy itching as well as changes in your vaginal discharge colour, grayish-white for BV and yellowish-white for yeast infection. Good news, they can be treated easily by a doctor. Don’t sweat it if your discharge is odor-free, clear or white egg-like. They will become thinner and more watery toward the end of your pregnancy. Pregnancy hormones are again to blame for that increase of cervical mucous and vaginal discharge.

Due to the change in your vaginal pH (more acidic), your vagina might smells and tastes slightly different. However, if it is not asociated with any itching or burning, you shouldn’t be worried. The taste can be more metallic or salty, according to the Journal of Perinatal Education. However, some researches note that the flavour will disappear during when you have an orgasm.

9 Tips to Rebuild Trust in a Relationship
Scroll to top