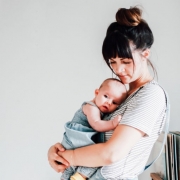 Right after giving birth, you might think that all the symptoms that you’ve been wrestling with over the last 9 months will be gone, that’s not always the case. Most moms will still experience some postpartum bleeding. Worry not if your nurse instructs you to attach three super-heavy-flow pads to your undies, bleeding after birth is normal and temporary. However, it is necessary to know what to expect, what’s normal, what’s not, and how to handle it.

Postpartum bleeding, a.k.a lochia, is a normal vaginal discharge that happens when your womb sheds the blood, mucus and uterine tissue that has lined your uterus while you were pregnant. No matter what kind of delivery method you went through, you might experience lochia.

How Long Does Lochia Last?

Lochia normally lasts around 4 to 6 weeks after birth. But rest assured if your bleeding lasts more than 6 weeks as it’s normal too. The lochia is typically heavier and more intense during the first few days. However, it will gradually lessen as time goes on.

Normal lochia looks just like a heavy period at first with the red to browny color and has a similar, musty smell. But it will become lighter in color and flow as the days and weeks go on. Below are what you can expect in details:

If you’re active or breastfeeding, expect to experience more lochia. Also, the flow might be different at certain times of day, like heavier in the morning.

When to Call the Doctor

Lochia is normal but watch it closely as it can also signal a problem. If you experience any of these concerning symptoms below, call your doctor:

How to Handle Postpartum Bleeding

The first thing you need to do when handling lochia is go for absorbency. Snag some super-thick pads from the hospital and also prepare some adult underwear like Depends or heavy pads at home.

You can change to a thinner pad or absorbent underwear, like Thinx, and later pantiliners once the flow lessens. Definitely don’t use tampons for the first six weeks postpartum as they can be very dangerous.

Here are some other tips to take notes:

Postpartum bleeding might come as a shock as you didn’t expect it at all. However, with this blog, we hope that you feel more prepared about what’s to come!

Vaginal Estrogen Creams: Are they safe?